A Startup Sabbatical: What I learned from 11 months in politics 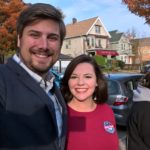 In the beginning of 2016 my wife came to me with a proposition—she wanted to run for New York State Senate.

Against an incumbent. With a lot more money. And she wanted my help. At the time I had been immersed in the upstate startup ecosystem. That was all about to change.

We had always been a team in nearly everything we did, so by no means did this come as a surprise. A decade earlier I had spent some time in government myself so it wasn’t completely foreign to me. And of course, I had regularly attended a mélange of political activities with my wife over the years. “Why not?”, I thought to myself.

Was there risk? Absolutely. In fact, some would say there was nothing but risk. But we are young, we are passionate about making WNY a better place, and we both had the drive to do it.

Suffice it to say it didn’t take much thought before I decided I was in. After all, my wife had unequivocally supported me in one crazy business idea after another (many of which did not exactly turn out as planned). Over the next 11 months we worked as hard as we possibly could. We drained our savings to support the campaign. I took a leave of absence from my law practice (a big thanks to my partners at Colligan Law) and business to personally work on the campaign. Heck, if we were going to do this, we weren’t going to have any regrets. Certainly not ones that come down to whether we could have worked harder. Trust me when I say we couldn’t’ have.

Together we laughed, we smiled, we cried.  We shared successes (a tremendous primary win) and also failures (a less than tremendous November). We lost friends but also gained new ones. We faced unimaginable challenges—continually getting knocked down. But every time we’d brush off the dirt and stand back up. Together. We may have ultimately fallen short of our goal with the campaign, but looking back I have nothing but pride in what we accomplished and the journey we went through together.

I’m now back in the startup world and after some time to reflect, wanted to share some observations with both aspiring entrepreneurs and politicians.

Whether you are a startup or running for office, raising money is hard work. Let me repeat that in case there was any ambiguity—it is hard. Really. Hard. It’s not going to be easy. It’s not going to be fun (if it is, please proceed to point #3). If you’re anything like me, I hate asking people I know for money—let alone complete strangers. In the end, you’re going to be told no far more often than you are told yes and no matter what you raise, it is never going to seem like it is enough. It doesn’t help that everything you want to accomplish will seem like it takes twice as long and cost twice as much money.

The key: have a process in place and be persistent. You are going to have to talk to countless investors or donors and be told no more times than you’d like. Far more times. You’re going to need thick skin and manage any fear of rejection or failure you might have. It’s going to feel like a punch in the gut. Each time you’ll need to take a deep breath. Compose yourself. And keep working the plan.

It’s all about the team. Spend enough time in the startup ecosystem and you’re bound to hear someone say “it’s all about the team”. You can have a great idea but without a great team you are going nowhere. The same holds true for politics. You can have a great candidate or platform, but without the right team you stand little chance of success. To that extent, a political campaign is no different from the team you build for a startup. You need people with experience. People who have been there before, failed, maybe even succeeded, and learned countless lessons along the way. You need a team that can manage finances, fundraising, operations, marketing and public relations, and development—all while enjoying the emotional rollercoaster that comes with starting a business or running for office. Before you start any venture, make sure you give plenty of thought to building the right team. This is always an awkward conversation to have with either entrepreneurs or politicians. Few people want to acknowledge the mental health impacts of either career path. That’s not to somehow discount how difficult both can be, but as Jessica Bruder wrote in her Inc. magazine article, The Psychological Price of Entrepreneurship, “it’s time to be honest about how brutal it really is”.  If you haven’t read Jessica’s article, you really should.

Both politicians and entrepreneurs rely heavily on impression management—better known as “fake it till you make it”. I have even been guilty of citing this cliché. But this is exactly what occurs on the outside while privately you spend months if not years getting beat up, rejected, defamed publicly, stressing out about fundraising, working every hour of the day (often underpaid if even paid at all), all while constantly having the fear that all this effort may lead to failure—that after putting everything on the line you won’t succeed.

It’s very easy to see how so many people end up quietly suffering and how we have created a system which isolates and exacerbates the problems. Depression, substance abuse, and mania, are all common traits among politicians and entrepreneurs (and lawyers for that matter). Shockingly though, at least through my own observations, politics manages to be even worse about acknowledging the mental health toll the profession takes. Maybe it’s just me, but society as a whole could benefit greatly from all of us acknowledging the price candidates, staffers and their families often pay.

Toby Thomas, CEO of EnSite Solutions (No. 188 on the Inc. 500), explains the phenomenon with his favorite analogy: a man riding a lion. “People look at him and think, This guy’s really got it together! He’s brave!” says Thomas. “And the man riding the lion is thinking, How the hell did I get on a lion, and how do I keep from getting eaten?”

And that’s exactly what happens. I’ve been unfortunate enough to experience firsthand just how painful this dynamic can be in both the startup ecosystem and the political world. Ten years ago, it was myself while working for campaigns battling my own depression. More recently I had a person very close to me try to take his own life after feeling like a business he started failed. And on the morning of November 9, 2016, both my wife and I woke with a feeling of despair as we started wrapping our heads around picking up the pieces and moving forward.

Admittedly, these conversations aren’t easy to have. It’s not easy for me to even write about. But pretending they don’t exist is ultimately an impediment to the long-term success of the people who make up both ecosystems. If we’re going to change this dynamic, we all must commit to acknowledging the psychological price that is paid and work towards ending the stigmatism that keeps people quietly suffering.

Don’t be afraid to fail.

Nine out of ten businesses will fail. At least fifty percent of candidates will fail. Statistically speaking if you are thinking of running for office or starting a business, you are not going to succeed. Yet somehow most of us pretend that these numbers don’t exist. It’s much easier to just ignore the possibility that failure could occur. Or worse yet, don’t even bother trying at all.

Failure doesn’t have to be a bad thing. It also doesn’t have to end your desire to be an entrepreneur or politician. The important thing is to learn from your experiences, make improvements and move forward. Unfortunately, as a society we have programmed ourselves to fear failure to the point where we avoid taking risks at all. This needs to change if we are going to allow for talent and creative ideas to flourish outside of the hands of a select few.

Both politics and entrepreneurship offer the opportunity for high impact, for community stewardship, the ability to benefit your career, to make mistakes, to fail and try again. Ultimately the story ends whenever YOU say it ends. Don’t be afraid to take risks. Don’t be afraid to put it all on the line, fail, learn, improve and do it all over again.

In the end I am glad to have my feet firmly planted back in the startup world but the parallels between both the entrepreneurial ecosystem and politics will continue to captivate me. Fortunately for me, fall in Buffalo has become peak season for both. October welcomes Buffalo startup week, the 43North finals, and startup weekend with the general election but a few weeks away.

Seems to me like a pretty ideal time for these two to learn from each other.

Original article can be found on the Upstate Venture Connect website: